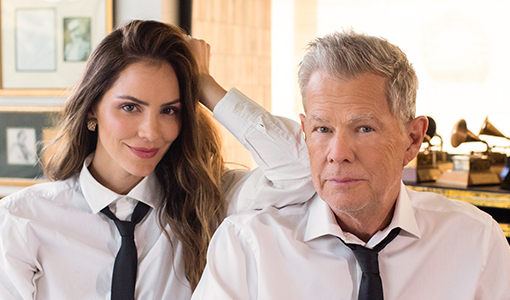 The Greater Toledo Community Foundation celebrates 50 years of working with the citizens of Toledo and Northwest Ohio to create a better community for generations to come. The Toledo Symphony is proud to partner with the Greater Toledo Community Foundation with a performance featuring 16-time Grammy award-winning musician, composer, and producer David Foster and acclaimed singer, television, and Broadway star Katharine McPhee. The duo will perform 5 decades of hits alongside the Toledo Symphony with guest conductor Stuart Chafetz. For more information about GTCF's Fifty Years of Funding Futures, visit: https://50yearsfortoledo.com/.

Coming directly from the Living Room to the stage, this intimate show with the powerhouse duo will be packed with David‘s hits from Chicago, Whitney Houston, Celine Dion, Josh Groban, Michael Bublé etc. and Kat’s biggest songs from American Idol, Smash, and Waitress. Plus some of their favorites that they just love!

Katharine McPhee can most recently be seen starring in the Netflix Original Series COUNTRY COMFORT. Previously she starred as ‘Paige Dineen’ on the CBS’ spy drama SCORPION and starred in NBC’s award-winning musical series SMASH, executive produced by Steven Spielberg. Her other television credits include CSI: NY, COMMUNITY and FAMILY GUY.

Katharine appeared on the big screen in Columbia’s romantic comedy THE HOUSE BUNNY. In addition to her acting career, she finds great success in the music space after her turn on Season 5 of AMERICAN IDOL. Katharine’s first single debuted at #2 on the Billboard’s Hot Singles Sales chart. Her debut album landed on the Billboard 200 chart and went gold in 2008.

Katharine also has a presence in theater, having recently starred in both the U.S. and U.K. productions of 'Waitress'.