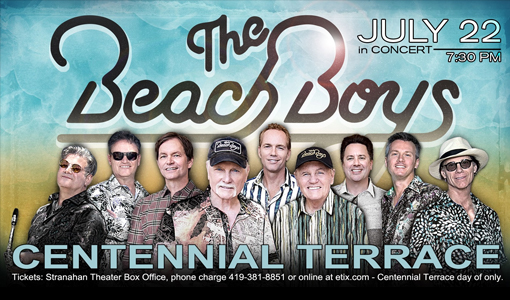 The Beach Boys will be performing live at Centennial Terrace!

As The Beach Boys mark more than a half century of making music, the group continues to ride the crest of a wave unequalled in America’s musical history. The Beach Boys have become synonymous with the California lifestyle and have become an American icon to fans around the world. The Beach Boys will pull into town to perform on July 22 at Centennial Terrace in Sylvania, Ohio. Since the band’s co-founder, lead-singer and chief lyricist Mike Love penned the lyrics to The Beach Boys’ first hit, “Surfin’” (1961), dozens of the bands chart toppers have become eternal anthems of American youth: “Surfin’ USA,” “Surfer Girl,” “Fun, Fun, Fun,” “I Get Around,” “California Girls,” “Help Me Rhonda,” “Barbara Ann,” “Good Vibrations,” “Wouldn’t It Be Nice,” “Rock and Roll Music” and “Kokomo.” The Beach Boys have sold over 100 million records worldwide and have received more than 33 RIAA Platinum and Gold record awards. The Rock and Roll Hall of Famers where also honored at the 2001 Grammy Awards with the Lifetime Achievement Award. With more than five decades of touring under their belts, The Beach Boys have performed more concerts than any major rock band in history.

- Centennial Terrace is an outdoor venue and concert will take place Rain or Shine
- General Admission Section has no chairs (standing or bring a small chair)
- Please no carry in food, drinks or coolers
- Advance tickets available at the Stranahan Theater, phone 419-381-8851 or etix.com
- Night of concert tickets and Will Call available at Centennial Terrace beginning at 6PM