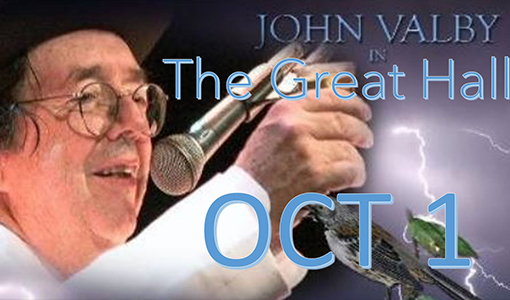 What makes Valby so unique and entertaining is his uncommon rapport with the audience and his ability to mix his musical talent with a mad-cap variety of “Dirty Ditties”. Few people can resist laughing at songs that would have earned them a mouthful of soap when they were children. Valby’s repertoire is composed of popular songs, limericks, classical arrangements and his own original creations. Valby has made a career out of poking fun at his audiences, stretching the limits of free speech and accepted good taste and satirizing current events from behind the piano.

When he’s not playing and singing, he yells obscenities: the audience yells back and everyone has a good time. The best way to describe John Valby is to blend the following performers together. Allen Sherman, Spike Jones, Lenny Bruce and Wierd Al Yankovic all topped off with the Dirt of Redd Foxx.