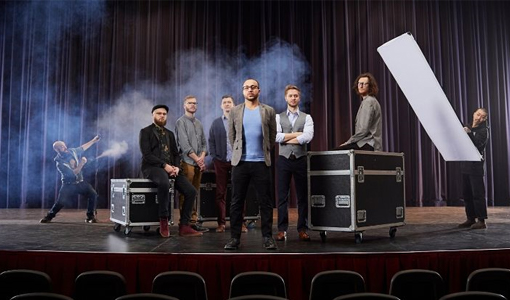 Bassel & The Supernaturals and Wall Music

Bassel & The Supernaturals and Wall Music will be performing at the Toledo Museum of Art!

Bassel & The Supernaturals tells the story of Bassel Almadani's experience as a first generation Syrian-American using soulful melodies, funk inspired grooves, and captivating lyrics regarding love, loss, and the war in Syria.

Deeply inspired by Otis Redding, Bassel uses the stage as a vehicle to engage audiences in over 100 different cities across North America. In addition to performing in major festivals, performance halls, concert series, and clubs - the group works closely with organizations on events and residencies that build awareness and empathy for Syrian refugees. A substantial portion of their proceeds benefit the Karam Foundation, a 501(c)3 organization focused on building a better future for Syria.

Bassel & The Supernaturals has performed in over 300 concerts between 2016-2019 on stages including SXSW, John F. Kennedy Center, Summerfest, and Millennium Park, and supporting internationally touring artists such as Youssou N'Dour, Brother Ali, Aesop Rock, Emancipator, The Dandy Warhols, Sinkane, and many others.

Upon returning from a service trip to Istanbul in September 2019 working with displaced Syrians, Bassel is preparing to release a new full-length album, Smoke & Mirrors, with his group in early 2020. The latest single "Stepping Back in Time" has over 150,000 streams after being featured on Spotify's official 'All Funked Up' playlist.

Wall Music along with vocalists Anitra Chery and Tracy Haynes are one of Toledo’s high–energy concert bands. The band that began from childhood friends in 2008 has developed into a phenomenal show. From playing local venues to traveling all across the country providing diverse & historic classics. There is a sound that has been established from there roots of gospel music that has transcended into all genres. Wall Music is what we would call “hometown heroes.” There isn’t a setting too small or a stage too diverse. The band prides itself on leaving a lasting impression every time they take the stage. There is a unified presence between the band, the vocalists & the audience that captivates every moment.

Sponsored by ProMedica and the Toledo Museum of Art.