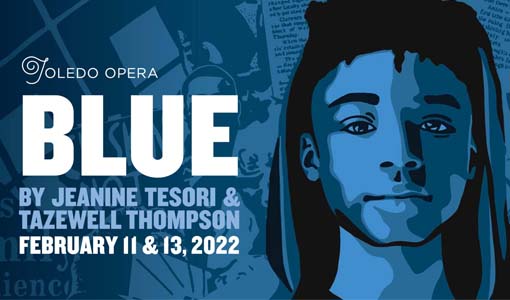 An African American couple in Harlem anticipates the birth of their firstborn, a son, with both hope and fear. As the baby grows into a young man, the mother worries for his future, and the father tries to prepare his son for the realities of 21st century America, while wrestling with his own identity as a police officer, a "Black man in blue." When their deepest fears come true, the family is forced to navigate a devastating reality seeking answers and support from their church and community. Toledo Opera presents the Tony Award®–winning composer Jeanine Tesori and NAACP Theatre Award–winning librettist Tazewell Thompson’s new opera inspired by contemporary events and Black literature. Influenced by gospel music and using vivid flashbacks, Blue places timely issues at the forefront of modern opera and invites audiences to the emotional epicenter of their impact.  Chelsea Tipton, II conducts and librettist Tazewell Thompson directs.

Starring Allen Michael Jones as The Father and Krysty Swann as The Mother.