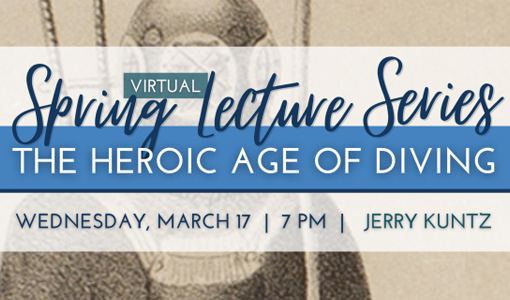 During the 1840s and 1850s, during the infancy of the development of underwater breathing apparatus, Lake Erie became the proving ground for this new technology. The salvage of three infamous passenger steamer wrecks, the Erie, the G. P. Griffth, and the Atlantic became the incentive for divers and engineers to test the limits of their new devices. Foremost among them was John Green, a man who kept secret the story of his own tragic shipwreck.

Jerry Kuntz is a researcher and writer residing in New York’s Hudson River Valley. His books include biographies of exceptional, but little-known 19th Century Americans: Wild West Show sharpshooters, pioneer aviators, baseball league promoters, dance hall denizens, a teenage Amazon plant hunter, and early apparatus divers. He is currently researching the balloon-parachuting craze of the 1890s. Kuntz was educated at Earlham College and Rutgers University, where he earned a Masters in Library and Information Science.

This will be a virtual lecture and is free.  Donations are always happily accepted.  When you register with Eventbrite, there is an option to purchase “Heroic Age of Diving”, which will be shipped after the lecture is over.